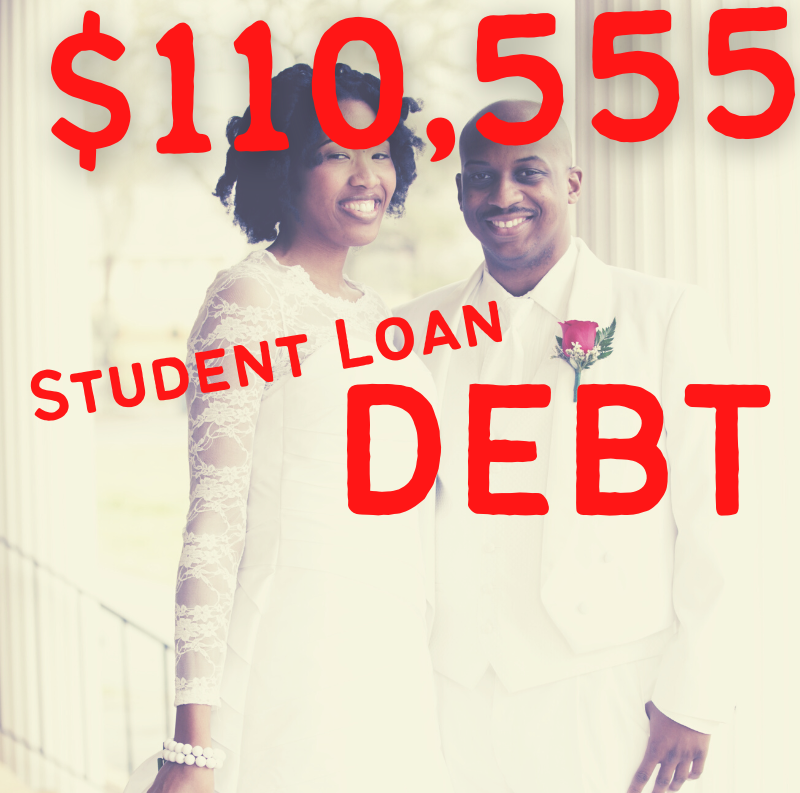 Want the quick, simple answer to if you should marry someone with $100k in debt?

If I could only choose yes or no, I’d say no. I wouldn’t advise anyone to marry someone with $100K in debt.

Consider this when deciding whether to marry into six figures of debt:

I had to make the exact same decision. But I didn’t think it through.

I didn’t think debt was a big deal. I didn’t have a plan for how to pay it off.

PLUS, everyone tells you:

“The dating pool is shrinking.”

“Only gold diggers think about debt before marriage.”

There are a few instances where it is OK to still marry someone with a lot of debt.

Here’s how to decide if you should marry someone with $100K in debt:

First, figure out the nature of the debt.

When it comes to getting to know someone, every clue counts, right?

Well, debt is a BIG clue.

But the type of debt someone carries can tell you a lot.

A boatload of student loan debt could mean:

The point is this:

What does the person have to show for the money spent on education?

Everything other than student loan debt and medical debt gets lumped in another category – the NOT-OK-to-marry category.

Those are huge red flags for me. Six figures of consumer debt like that usually indicates the person is living beyond their means. It’s a telltale sign of financial irresponsibility.

And the root of financial irresponsibility is usually some sort of character flaw.

Aside from the character flaws, debts of this type are just hard to pay off. These types of debt usually have high interest rates that jack up the total repayment amounts.

Also think about this when wondering if you should marry someone with $100K in debt:

*Ask yourself: Is the debt a mistake of ignorance or a pattern of behavior?

Second consideration, what is the person’s income?

Looking at how much someone makes when considering becoming a life partner IS NOT wrong.

Income is an indicator of how quickly (and how likely) a person is to pay off their six figures of debt.

The person should want to pay off their debt in the first place.

(And if they don’t even want to even pay it off, that’s a whole ‘nother issue. Short answer, though: RUN!)

In order to pay off debt, you need discretionary income.

You need enough income to live and exist (pay rent, utilities, food, gas, etc.) But then, you also need income that you can just throw at debt payoff.

It becomes very difficult to pay off debt if that discretionary income is very little or non-existent altogether. So income becomes an important factor.

How do I know?

Because I lived it. In fact, I’m still living in it.

What’s the big deal with Debt? Is Debt Unavoidable?

High debt is a big deal because it often means a lower quality of life, more stress, and less fun with your spouse. Who wants that?

Chances are this: Almost all your dating partners are going to carry some form of debt. This is especially true with:

Take all that and you are guaranteed to meet more people with debt than people without debt.

Is it Shallow to Consider Money and Debt before Marriage?

Obviously, a person is not the sum of their mistakes. A person’s worth is not defined by how much debt they have and how much money they make.

But debt shows you a big part of someone’s money management.

And money management offers a pretty good window into a person’s character – and their shortcomings.

If you’re dating for the purpose of marriage, you cheat yourself if you don’t even think about debt before getting married.

Because the numbers don’t lie, friend.

Only behind cheating, money problems are causing most divorces.

Dealing with debt only adds to the difficulty.

Money is a stressor. Lack of money leads to lack of choices. Check out this post if you want to see what that looks like in a marriage.

Marrying for potential keeps a lot of people in relationships.

It may seem like the dating pool is shrinking and the options are getting thin. But, don’t settle when it comes to a marriage partner.

The regret and struggle is not worth a longer single life.

Do This To Lower Your Risks In Marriage

Real quick, let’s first be clear about decision-making. And why you should take your time deciding to marry someone with $100,000 in debt.

No one has a crystal ball, knows all the lottery numbers, or can predict the coming of Christ.

When it comes to decisions, we all make an “educated guess,” as the scientists say. There are anomalies. Outliers can happen. We can “do it all right,” and still not get the right result.

We make the best decision we can with the best information we have at the time of the decision.

The basic idea of considering debt in a life partner is considering likelihood – it is weighing risk.

But I’ll go out on a limb to say this: There are small cues to show a person’s true self. You can tell if a person is inclined to a certain way – be it destructive or productive.

(Get the book. Seriously, it was a game changer for me.)

He explains that we are all moving toward something, be it success or failure. We are making incremental 1 percent steps toward one or the other.

Looking at a person’s debt load helps you better figure out someone’s bent. Where are they leaning toward – success or failure?

Because guess what, Buttercup, you will be going right along with them, if you decide to marry.

Divorce is an option, I guess. But who gets married thinking: “I can always just get divorced?”

Everyone wants a marriage that is forever, until death do us part.

So that’s why this is important. The quality of your life is on the line.

Are There Exemptions To The Rule?

Circa 2012: I dated a man (who would later become my husband) was working a very part-time job as a school crossing guard making less than $20,000 a year.

He had an old, unreliable car and often took public transportation to our dates.

He was 25 years old and still lived with his parents.

Every woman in America would give him a hard pass.

On paper, he would be a poor (literally and figuratively) choice for a marriage partner.

While we dated and nearly 10 years later, he studies the Bible with me, prays with me, and works every day to live a life pleasing to God.

He also was not OK with his debt and didn’t keep adding on more debt. He wanted to pay it off.

And some 10 years later, he has more than quadrupled his income.

But those nearly 10 years of marriage included a lot of struggle, resentment, and possibility of divorce. It all stemmed from this enormous debt we had to pay and the lifestyle we had to live in order to pay it. You can get all the details in this post.

Marrying with debt is a roll of the dice, but some people are willing to risk it.

But here’s one piece of advice I’d give:

If you marry someone with over $100,000 of debt, get out of debt BEFORE children.

You and your spouse need to get on the same page FAST!

It’s not automatically going to happen.

Dave Ramsey often shares how you can wander into debt, but you can’t wonder out.

Getting out of debt takes being very intentional.

You get married to the love of your life.

And you skip your honeymoon.

That was real life for Josiah Poletta and his wife and their over $100,000 worth of student loan debt, as described in the “Borrowed Future,” documentary.

How’s that sit with you?

That may not be your thing. And that’s totally fine.

It’s just an example of the intensity it is going to take if you marry someone with $100,000 worth of debt.

Y’all need to get out of it, ASAP!

That means doing it as fast as humanly possible.

So you can move on and really live your life.

Either you pay on the front end or you pay during.

You will pay a price.

A lot of this deals with your sentiment toward debt in the first place.

Some people are perfectly content with taking their student loan debt to the grave.

You may think you are getting over and beating the system if you just drag out your student loans.

But I argue that you are still paying a price. You are signing up for an entire lifetime bound and chained to debt. Even if you can “comfortably,” make the payments. Who wants that? Really?

If you could pay off all your debt and be done with it for life, wouldn’t you?

The point is getting out of debt is going to take a lot of hard, intentional work.

You will pay a price to win at this debt-free journey game.

Either pay in the beginning of your marriage, get it out the way, and move on to enjoy the rest of your years.

The other option is you and your spouse pay the price throughout your marriage when things become more complicated (cue: children, aging parents, career advancements, home buying, etc.)

Take it from someone who has been there.

I wish we were more intentional about paying off our debt early in our marriage.